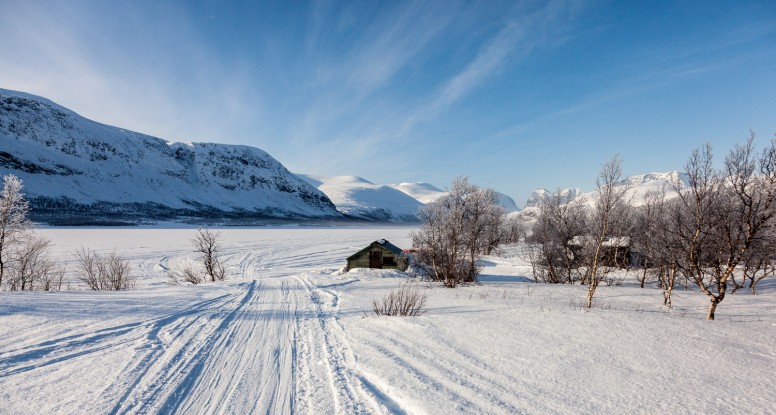 Some winter weeks at Nikkaluokta

Similar to last year, I spent some weeks in and around the small settlement of Nikkaluokta in Swedish Lapland to work/help out and also for some skiing vacation.

Getting there: My plan was to arrive in Nikkaluokta just in time for the big get together of staff and locals at the Kebnekaise mountain station. However, this was almost sabotaged by security at Frankfurt Airport being on strike the day before my departure, leaving the airport in utter chaos. People (those who missed their flights the day before) queueing already in the moring for hundreds of metres and airline staff just starting late and in small numbers at the checkin desks and luggage drop-off: Business as usual on an unsual day. With the result of many non-transit passengers missing their flights again. Thank you Lufthansa! 🙁 I however, I made it just about, only because my flight was late for technical reasons, and totally soaked in sweat as I had to run multiple times with heavy luggage including skis and because I was already wearing part of my arctic clothing. So I arived at Nikkaluokta around 16:00 and went to the mountain station by snowmobile right away. Luckily I managed to find time to change my sweaty shirt before.

Work at Nikkaluokta: The following days were filled with moving around tons of snow, I had to drive guests to the mountain station by snowmobile occasionally and we transportet some wood and propane to the Singi hut by Hägglunds bandvagns. One night I even had to search and collect a brave Korean who decided to start walking to the mountain station in late evening ill prepared. He started ill prepared and ill equipped, totally underestimating how low temperatures can fall, and unaware of the fact that there is actually no road. I found him by nightfall, just before lake Ladtjojaure, when he had made about one fifth of the whole distance. And he was more than happy to get a lift on my snowmobile when he realised how far it actually was 😉

It was unusually “warm” for this time of the year, so the sky was often cloudy and there were not many chances for Northern Lights. However, there were some nice ones now and then.

The ski trip: After Andrea arrived, the plan was to go on a skiing trip for a week, starting at Nikkaluokta, via Kebnekaise, Singi, Sälka, Nallo, Vistasvagge and then back to Nikkaluokta. We had our mountian skis, a tent, sleeping bags, petrol stove, a shovel and everything else you need for such a trip. To make it short, the trip was quite exciting and an adventure due to very bad weather! We even had to cancel our original plan and we turned around at Sälka: With close to zero visibility for days and constant storm which would blow you up-hill this would have been rather senseless. A group of frenchmen tried the route, but they also turned around at Nallo one day later.

We had some moments when the sky would open up for an hour or two, but most of the time there was extreme storm. One night they measured well over 50 m/s at Tarfala, and the other night Kaitumjaure lost the toilet building in the storm. Andrea managed to actually fly in the air at Singi, just to give you an idea of the storm we had most of the days!

Since the weather was so bad, we spent some days at Singi with friendly Janne, the warden, and we really enjoyed it there in the cozy cabin. Furtheron, from Singi to Kebnekaise we had a rather relaxing calm day, with some strong wind from behind pushing us forward.

Unfortunately, a couple of days after the trip we had to leave Northern Sweden. It is always hard to leave the cold winter country to come back to almost summer temperatures in Germany!