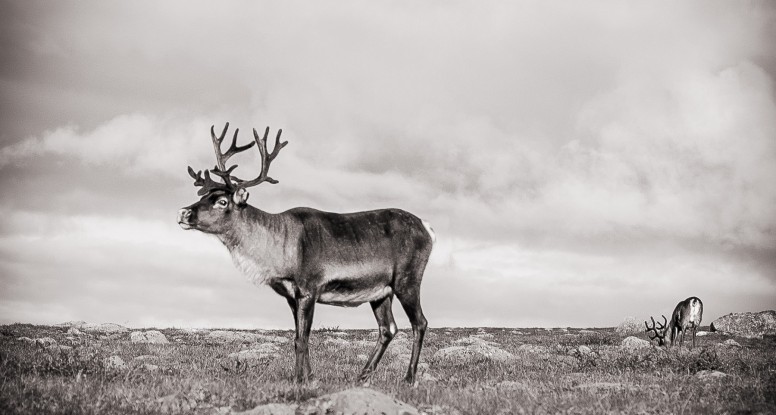 Today I got a quite unusual request from a friend in Nikkaluokta. She was asking if I had any images of reindeer similar to the style Nick Brandt sometimes uses with animals.

So I went through my archives if there were any images similar in style. Of course there is a huge pile of reindeer in my archive. However I was close to giving up, since most images were simply not taken to look like what I was looking for. And if I found animals standing in a pose I thought suitable, the sky or whatever background was not compatible with what I wanted to achieve. The images were simply not created with that vision in mind which was needed now.

Then however, I did remember some images I took on a 3 week photographic tour in and around Sarek National Park in Northern Sweden in 2008. And there I found what I was looking for, a flat-ish landscape, with reindeer – isolated or in groups – contrasting against the sky. After some re-processing I came out with what you see below.

Of course this is not the style of Nick – and if he ever happens to see these images, I hope he is not offended to find his name alongside with them. Of course there is alot in there of how I usually take images, so whatever I do in processing now, it will only result in a variation of what I usually produce.

Even though technical quality is rather poor as I had to crop and process differently from what the capture was intended for, I still like the outcome and like to share it here.

Oh, and thanks to Anne Laila for triggering this experiment 🙂