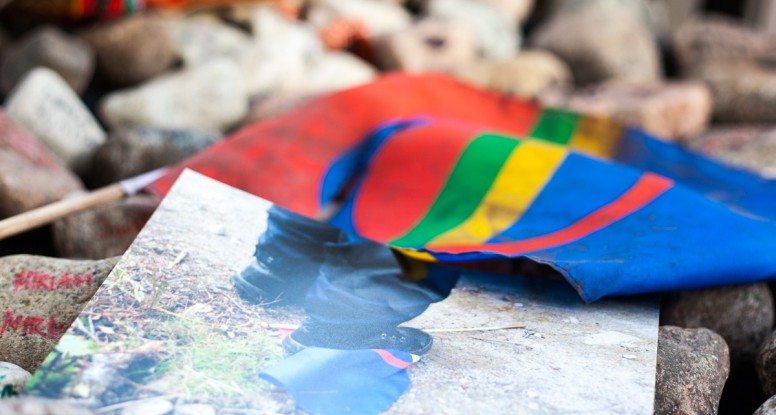 We just set up the Gállok Protest Art Exhibition in Galleri Skáidi, Nikkaluokta. Given the many painted fabrics and other pieces of art — and last but not least the hundreds of small rocks with signatures — this took quite a while and did cost some sweat. Thanks to Nils Joel for his help.

Background: At Gállok (Kallak) near Jokkmokk British-based company Beowulf Mining started a test drilling and test blasting campaign to prepare for a vast open-pit ore mine which would destroy pristine nature and also take vital reindeer grazing grounds and migration routes. For the local indigenous Sámi population this would pose a severe threat to traditional reindeer herding/husbandry and their way of life in general. So for good reason local resistance grew in recent two years and was joined by many non-Sámi locals fighting for clean water and intact nature and simply for the survival of their small tourist businesses. A mine at Gállok might create some jobs in the region for a couple of years (although most expert workers will not be recruited from local people), costs for improved infrastructure, however, will be on the shoulders of local communities — and when the mining companies leave the area in a decade or two, nothing will be left except permanent destruction.

Gállok Protest Art (GPA): Protest reached its climax last summer, when a protest camp and blockade was erected, cleared by police and security several times, only to be re-erected afterwards. The protest camp soon became a place of cultural exchange with local musicians, other artists, reindeer herders and local villagers supported by activists from elsewhere in Sweden and Europe. The exhibition gives an impression of the art produced and used mostly at the blockade, alongside with parts of the blockade itself and photographs by Henrik Blind documenting the protest and police action. Contributors to GPA were: Anders Sunna, Henrik Blind, Jenni Laiti, Johan Sandberg McGuinne, Katarina Kielatis, Lars J:son Nutti, Lena Viltok, Sáminuorra, Suohpanterror and Kamp Gállok.

To better inform visitors not aware of the Gállok struggle, we included additional texts from Tor Lundberg Tuorda, Per-Eric Kuoljok and from myself at the exhibition at Nikkaluokta. Thanks to Helena Ardne and Kirsten Stiebler for helping with translation work of some texts into English and German.

So my work far up North in Scandinavia is not just about driving snowmobiles and shovelling snow, but also about art and protest! Knowing beautiful Jokkmokk and its surroundings and also some people living there quite well, I tried to support the protest with as much as I could do from afar. However, you do feel quite helpless when you are too far away to really help effectively. So I was more than glad to at least contribute by helping with the GPA exhibition.