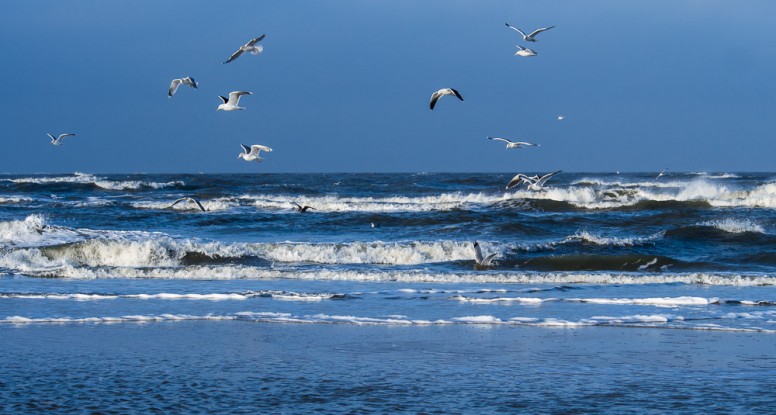 What is a better place to look back at last year’s highlights than a small island? I spent the the turn of the year at the German North Sea. My accommodation lies right at a sandy beach of the small island Amrum – the perfect place to look at the sea and relax, walk at the beach, drink lots of Frisian tea and even to fly a kite at the beach, which is several hundred meters wide over here. The kite nearly dragged me up into the air when the wind was quite hard!

Also, after two years, it was about time to refresh the appearance of my blog. You can see the earlier versions here: Website evolution 2011 . So this is actually the first blog article of this year, written in the all new design which also makes it easier for me to upload images. Hopefully the latter means I might become a bit more blog-active in 2014 than I was in recent years 😉 . But enough of all this now — where did I actually spend my time in 2013, and doing what?

2013 started as a rather exciting year for me, as in the first months I had a lot of spare time at my hand, and thus had the chance to do unusual things — away from home, away from the normal job. So it happened that from January until March I ended up in Northern Sweden, in Sápmi (sometimes referred to as Lapland). And later in summer I returned North again.

At the Kurravaara wilderness camp (January / February): If you head North of the Arctic Circle this time of the year, you make it for a cold start. And cold it really was at the Kurravaara camp for snowmobile and dogsled safaris close to Kiruna. There I did work together with Micha (the boss), guide James and  Maren. We kept the camp in order, tended to the guests and did shorter northern lights tours onto the nearby Torne river. In practice this meant basically shovelling lots of snow, chopping lots of wood, serving food for the guests, preparing the sauna and the outdoor hot tub when it is below -30°C/-22F (chopping wood again), keeping all the fires burning (here we go, chopping wood again), and last but not least driving around on a snow scooter (snow mobile for those of you more acquainted to this term).

Arctic Ballooning (February): In February I took a week off from the camp, for the traditional annual Wintermarket at the small town of Jokkmokk, a bit of snow shoe hiking at Stora Sjöfallet, and for a definite highlight: Arctic ballooning near Gällivare at the 7th Arctic Balloon Adventure. This was not my first time in the region, and not my first time in winter either, but it was my first time up in the air, seeing the vast forest and mountain area from above. A big thank you to our balloonists Sascha, Markus and Sascha from Skytours Cologne, who did a very professional job operating the hot air balloon at -25°C/-13F.

Life at Nikkaluokta (February / March): Mid-February I left Kurravaara to head for the mountains, to spend some time in the tiny village of Nikkaluokta close to Sweden’s highest  peak, the Kebnekaise. Nikkaluokta is known as “the coldest place in Sweden” — and I was not to be disappointed: temperatures on some days got close to -40°C/-40F. Perfect conditions to photograph aurora borealis, but sometimes a bit cold for outdoor work 😉 . And work there was plenty! Snow shovelling again (I must be an expert on that by now), transporting supplies such as food, propane, and wood to remote mountain huts in a vast area without roads. Thanks to Erik and his team from Alltransport and thanks to Margareta, Anna and the whole crew of Nikkaluokta Sarri AB, I really had a splendid time there — and always plenty of great food!

On stage: The Nordwelten audiovisual show on Swedish Lapland (May). After more than a decade of travelling the North, it was about time to present some of the  photographs taken and some of the stories to a broader audience than just friends and family. Therefore in 2012 we started preparing a short presentation, which later won an award (2nd place) at the Bergsichten Festival in Dresden (Germany). In 2013 we then prepared a longer version and in May it had its premiere at the Festival de Colores in Jena (Germany). Besides presenting the beautiful landscape of northern Sweden throughout the seasons, and besides interesting aspects of life at the Arctic circle and of the Sámi culture, the new show also focusses on the fight of the indigenous Sámi reindeer herders against foreign mining companies. With their plans to destroy areas which are crucial to  reindeer herding (pastures and migratory routes), these companies severely threaten the traditional way of reindeer herding and last but not least nature in general — often for short term profit only. Therefore this fight is also a fight of my heart and was in the focus of my attention for the whole year.  However the details would break the scope of this retrospective and will be explained elsewhere. Here you can find the teaser clip to our second show in 2013 in Dresden:

Marking of the reindeer calves and mountain hiking (June / July): After a couple of months in Germany, again to the mountains of Northern Sweden! This time for mountain hiking under the midnight sun and for attending the traditional marking of the reindeer calves. For the marking, which usually takes several weeks, the families of a Siida (Swedish Sameby, a Sámi reindeer herding community) move to their remote summer camp. Groups of free roaming reindeer are then driven into corrals where the calf markings take place, often the whole night until morning. It is amazing to see how even the youngest and oldest members of  the community for hours put all their strength and effort into the lasso-work and the marking.

A week in Manhattan (October): Finally, a trip overseas. In late October we went to New York for the New York Marathon. It was not me running though, but of course her! In any way a good chance to explore the city. There are two reports with some more photographs: Manhattan and New York City and The USS Intrepid Aircraft Carrier

A week at the sea (December): There were also some shorter trips and special weekends in 2013, such as a trip to Mariánské Lázně in the Czech Republic, or to the Harz-Region in Germany. And this very last trip of 2013 to the Amrum island just off the German coast, close to Denmark. Certainly a place I always love to return to — but for now I am really curious what the new year 2014 will have on offer!