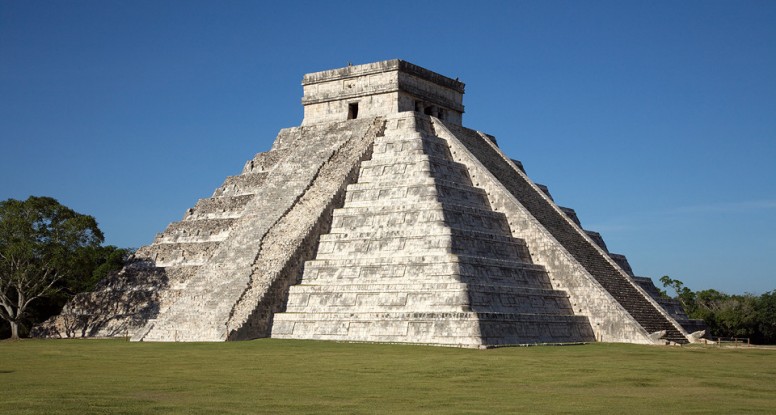 The Mayan City of Chichen Itza

The place “the mouth of the well of the Itza”, as “Chich’en Itza” translates from Yucatec Maya, was already inhabited early on in Mayan times, and it was known as a major city in the 6th century AD. Most of the Chichen Itza we can see today, however, was built much later in the 10th to 15th century, when most of the great Mayan city states of the to the south were already on the decline or had collapsed totally.
As it appears, Chichen Itza was a rather intercultural city, presenting a blend of Mayan and Toltec architecture.

At the central plaza of Chichen Itza you find the pyramid “El Castillo” with the temple of Kukulcan (the Maya name of Quetzalcoatl a Toltec king) at the top, the temple of warriors with a most prominent Toltec influence and a bit further away the great ball court.

If the Toltec king Kukulcan took Chichen Itza by brutal force, or if it was a more peaceful merger of civilisations, remains not undisputed today.

A word of warning to potential visitors of Chichen Itza

The UNESCO World Heritage Site Chichen Itza is probably the by far most popular archaeological site in the whole Mayan world. Most of its temples have been restored using mostly original material and the site has been vastly freed of trees and other vegetation. With the insane average number of 3300 visitors per day (2006), vegetation has no real chance ever to reconquer the city. With these visitor numbers, make sure to avoid peak season and peak time of the day at all cost. Do not be deceived by the almost deserted Chichen Itza shown on my photographs, I promise it will be very different when you visit the site!

Compared to the wild beauty of Tikal in Guatemala, I was a little bit disappointed because Chichen Itza appears so tidy, so restored, so unadventurous. But do not get me wrong, it is probably one of those sites were you could imagine best how it might have looked hundreds of years ago, when it was still inhabited. It is certainly worth a visit, if not even a must-see.