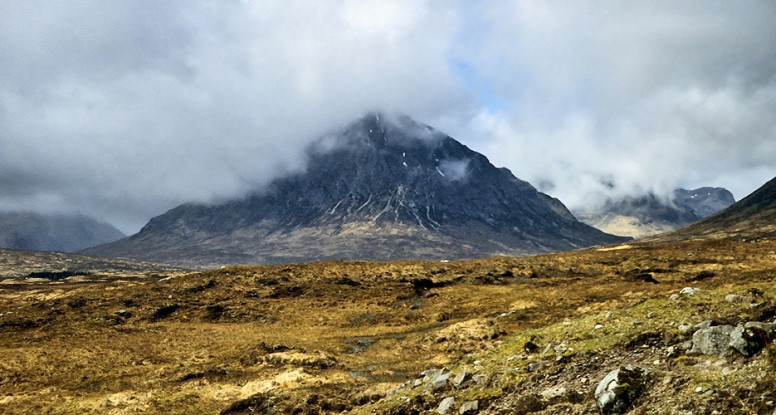 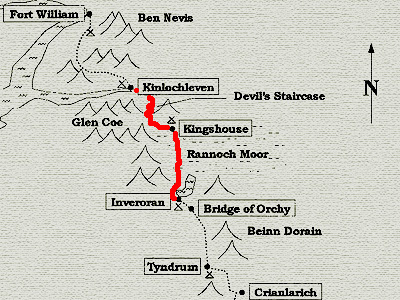 This day is all about crossing Rannoch Moor, one of the vastest and wildest moors in Britain. I was told with poor sight this would be one of the dullest parts of the West Highland Way, but I was granted acceptable weather with only little wind. Therfore I could capture some images, in particular at Ba bridge and later on at Blackrock Cottage. Most of the time the impressive peak of Buachaille Etive Mòr was in sight.

I put up my tent at the river next to the Kingshouse Inn and spent the evening in the nearby cosy Climbers Bar – together with the barkeeper, four young walkers from London (whom I met again and again on the West Highland Way) and a friendly Golden Retriever who somehow did belong to the place.
Later at night one could see the Comet Hale-Bopp in the sky, but since I was without a tele lens and without a tripod, there was no chance to take a decent picture (Blimey!).

Unfortunately, on the following morning the weather had changed dramatically, you could hardly see the sky and further up on the peaks there was some new snow. This day, climbing a mountain pass called The Devil’s Staircase and walking all the way to Kinlochleven, there was hardly anything to see but mist, rain and sleet. Hence I arrived in Kinlochleven pretty soaked, and due to a slip and slide in the mountains with a fair amount of water in my backpack.