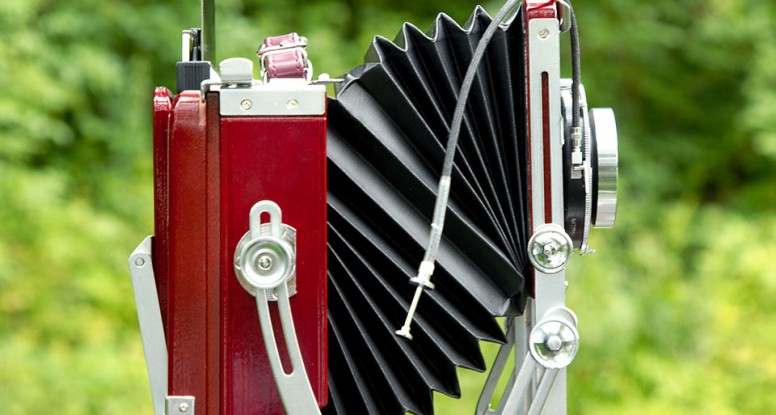 in Photography  by Alex August 4, 2012 5 comments
This entry is part 3 of 4 in the series Large Format Photography.

On the last 3 weekends I did my first tests with the Tachihara 4×5 camera and the Schneider-Kreuznach Symmar 5,6/150 and the Super-Angulon 5,6/75. As these were mere technical tests, I chose some historical palaces castles and churches which are easily accessible.
In such places open to the public, a photographer with a large format camera quickly becomes the centre of attention of many of the other visitors. You get stared at, people talk to you, ask a lot of questions. I was actually rather shocked how many people in their 30s and 40s seem to have forgotten what photographic film is, apparently never heard of bellows and focussing screen – and hence they cannot imagine that a camera can be so simple and mechanical, without any black box electronic magic.
So, if you ever try shooting large format yourself in public, be prepared to attract a lot of attention. It is sometimes even hard to concentrate on the shooting itself if too many people approach you.

Setting up the camera:

The following series of images show the setting up of the large format field camera: First you attach it to the tripod, unfold it, lock all the knobs tightly but not using real force, attach the lens board which holds shutter and lens, screw in the cable release, and finally you put the dark cloth on the back of the camera. 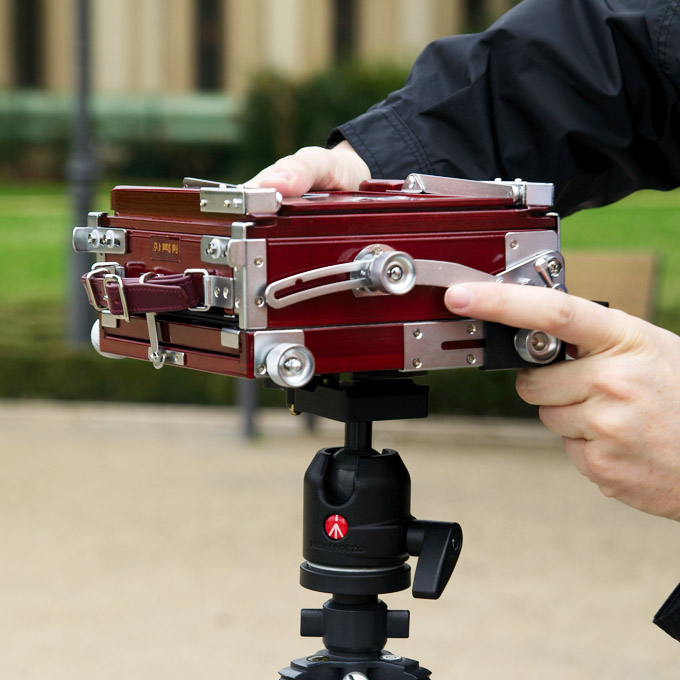 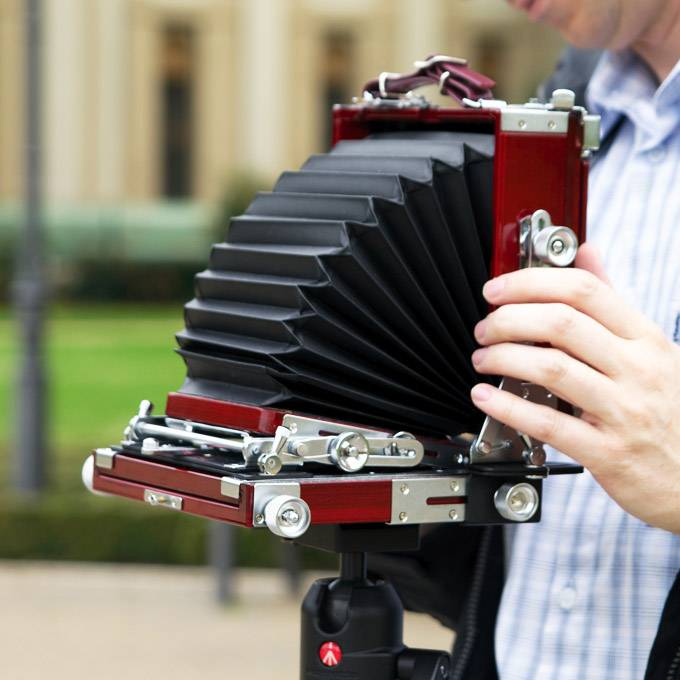 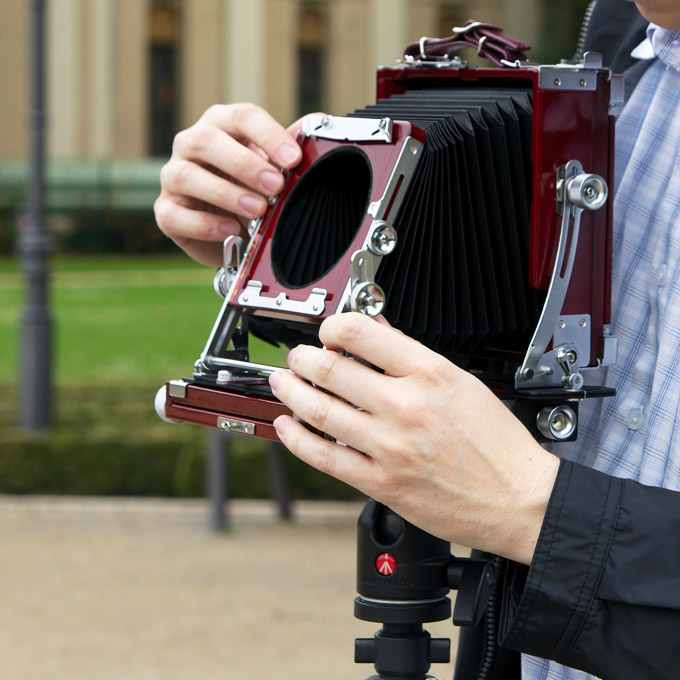 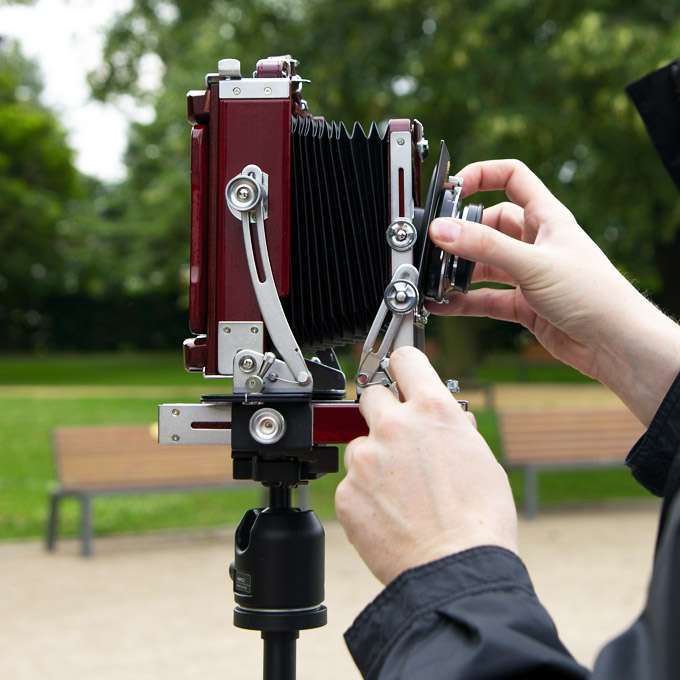 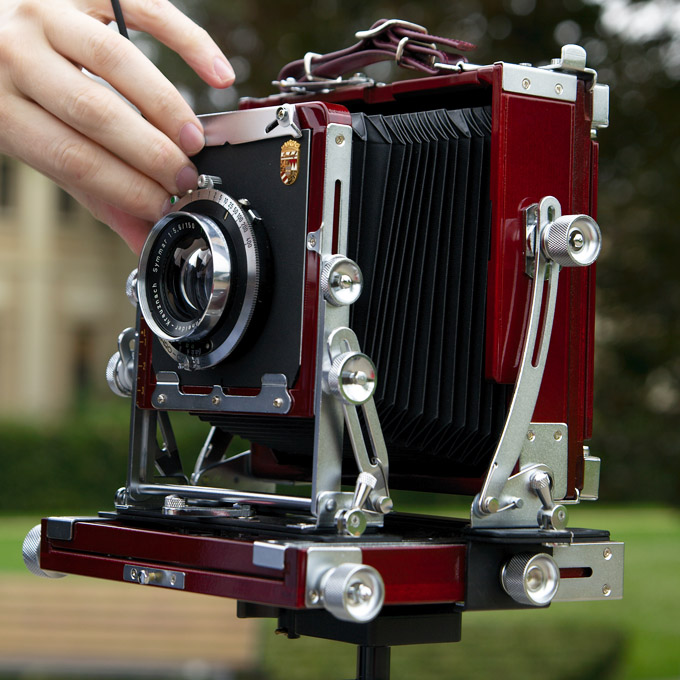 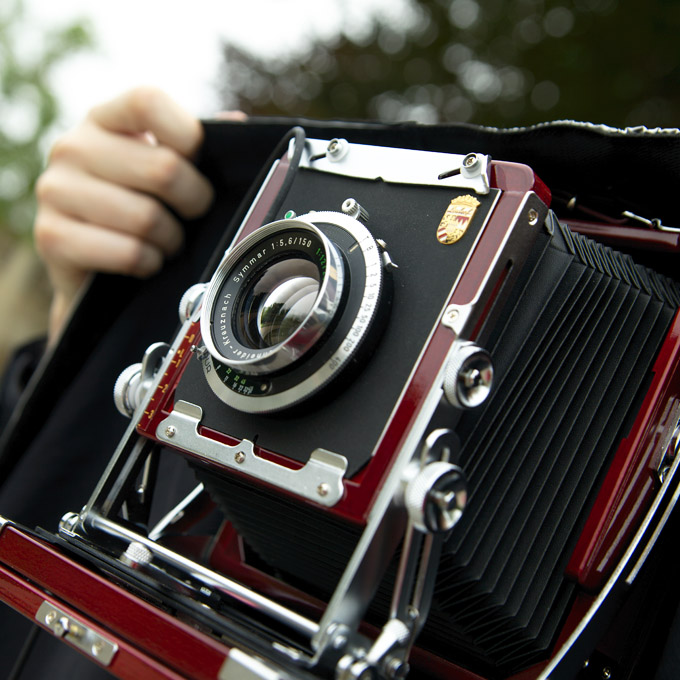 I got myself a small Harrison dark cloth, which is silver on the outside to keep temperatures down in the sun. But I have to admit it looks rather alien and together with my modern tripod it slightly spoils the classic appearance of the Tachihara 4×5. I have to get myself a black dark cloth some day, even if in the sun this means more sweat. 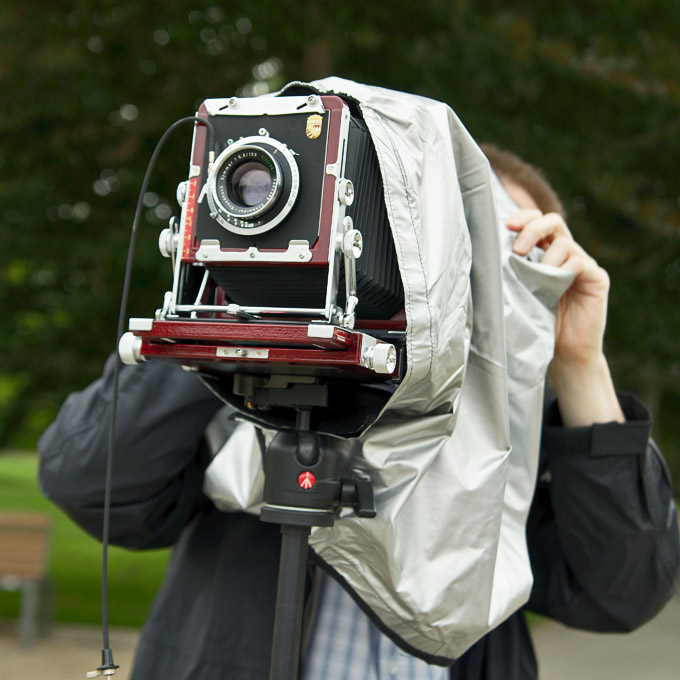 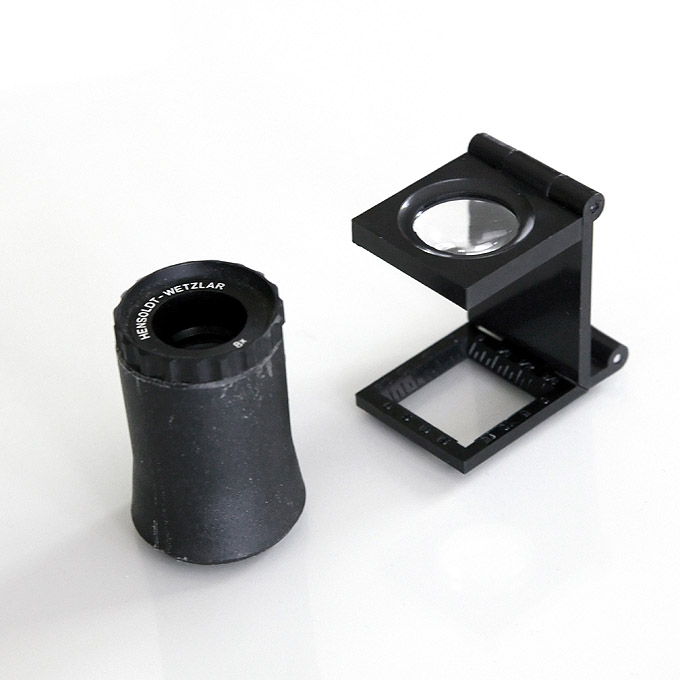 The one on the right hand side is a very cheap plastic loupe. It does the job in a way, but it is tiring to use and it is quite hard to really judge focus as that little piece of plastic is an optical disaster. Its only advantages are its weight and that it is very cheap. You probably will not get happy with that one.
The loupe on the left hand side is made from proper glass at least, and the tube it is stuck in was a bit of DIY by cutting off the hollow handle of some tool.

To expose the film, a light meter is of great help. In order to get exposure really as you want it, a spot meter is the best choice as you can use it to measure exactly the darkest and brightest areas of the image, and to measure those areas which are of particular importance/interest. If you own some other camera with a light meter built in, you can of course also use that camera’s light meter. After these measurements are done, you can then set your aperture and shutter speed to the the desired exposure. I will not go into detail here, but if you do not want to purely guess your exposure from those readings, you should have a look at the so called Zone System (Wikipedia link).
If you have not done it yet, you should now close the shutter and cock it. The following images illustrate the next steps: the film holder is inserted behind the focussing screen, the dark slide is pulled away, and finally the shutter is released via the cable and the image is taken! Of course, to protect the film from light, after the image is taken the dark slide has to be inserted back again completely. 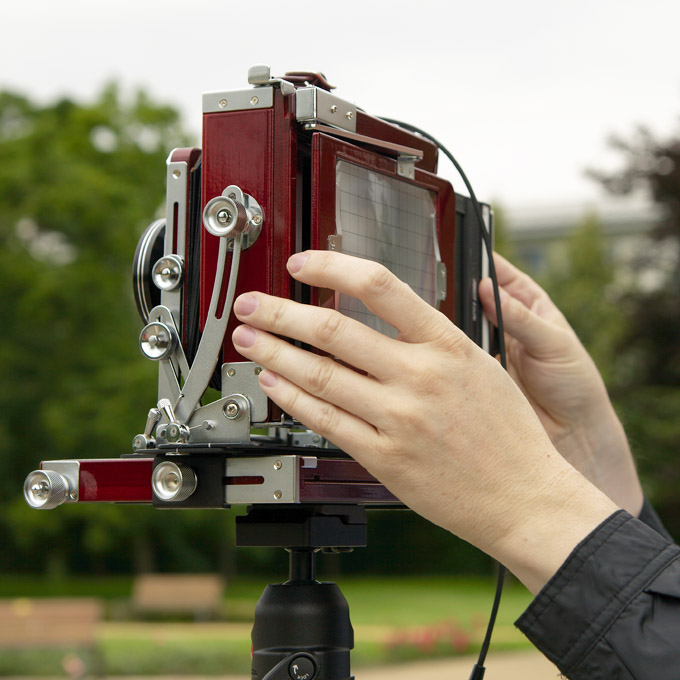 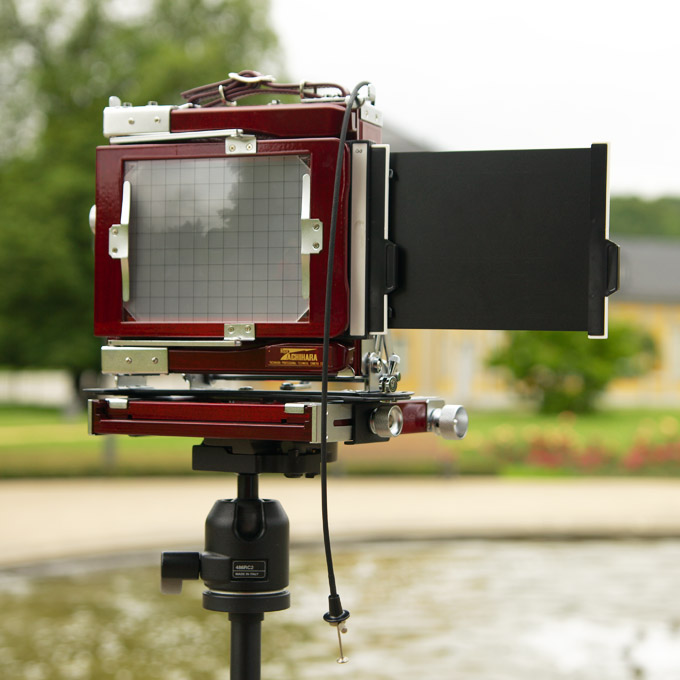 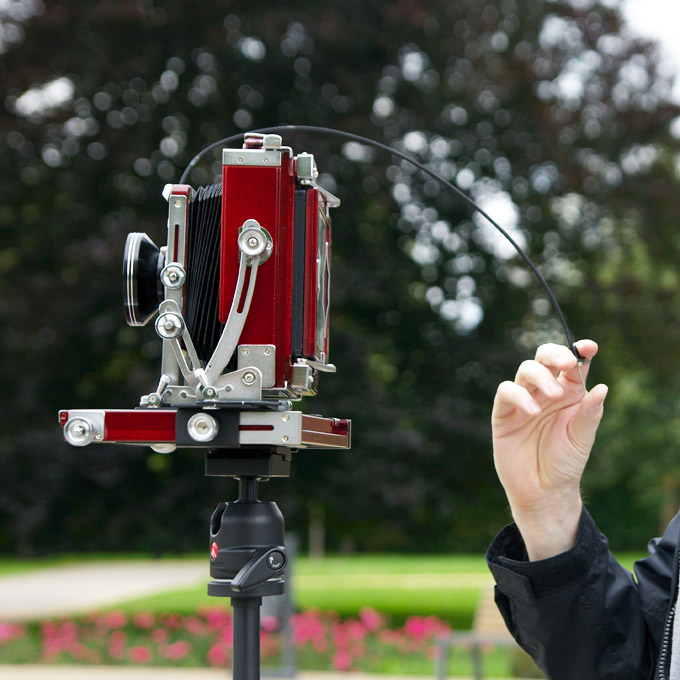 A lot of things can go wrong in all this, and believe me, I have made my share of mistakes! The following list gives some typical things which can go wrong easily, but it is by far not complete:

But even if you do everything right, things can go wrong as I had to experience on second weekend of test-shooting: After roughly the 20th exposure with my old Symmar, the shutter decided to stay open and to ruin the exposure totally! This was my last sheet of film I had with me on that day so I could not repeat it. Further experimentation with the over 50-years-old Synchro-Compur shutter showed that all the slow speeds below 1/25 would occasionally get stuck. And this seemed to get worse from day to day. Apparently the shutter had not been serviced and cleaned for a long time.
Fortunately, Mr. Reinhardt from Fotomechanik Reinhardt in Germany was able to react quickly and solve my problems. Now the shutter seems to work very reliable.

Below you can see some more extreme shift movement of the Tachihara camera, and two of the first negatives I produced with the Symmar 5,6/150 and the Super-Angulon 5,6/75. 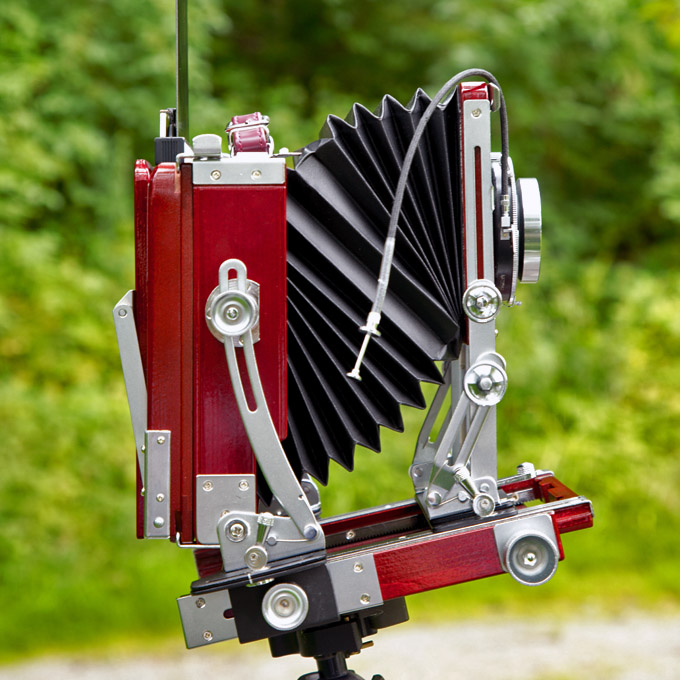 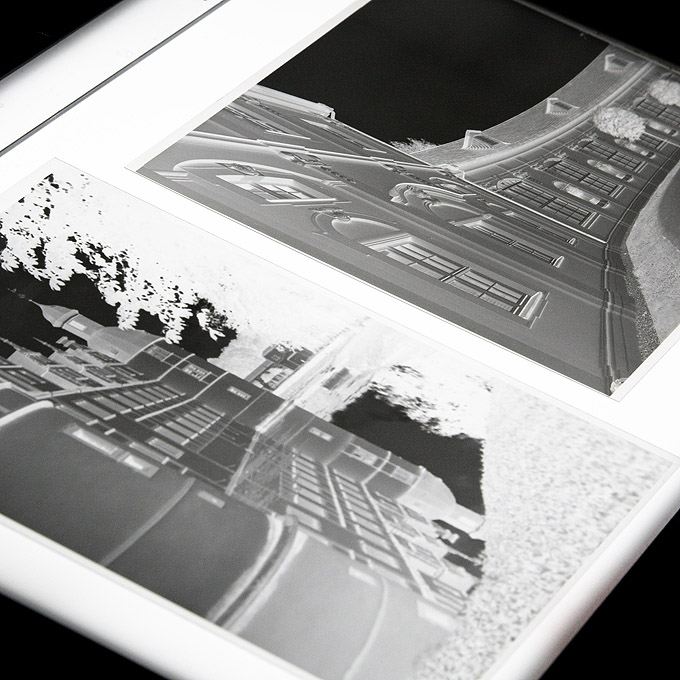 In part 4 I will show some more of the first test images I took with this setup. Articles on how to develop 4×5 sheet film and how to measure the exact shutter speeds of mechanical shutters will follow later.
Share