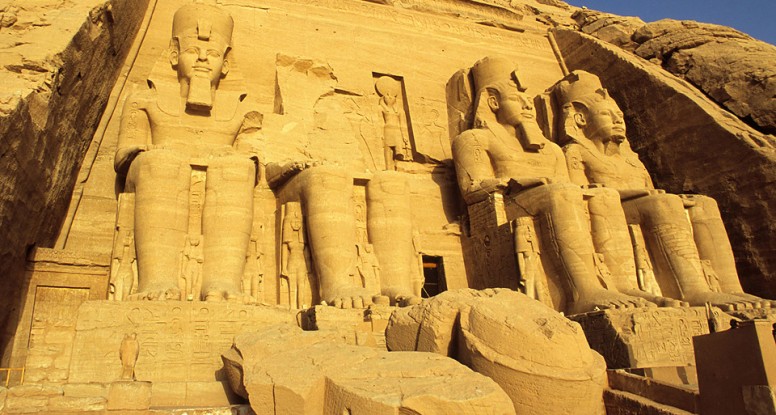 Ramses II, a Pharao of the 13th century BC, is considered one of the great rulers of ancient Egypt. Not only did he lead his armies into many victorious battles and reach a rather biblical age of more than 90 years, he also gave Egypt many colossal monuments.

After his victory over Egypt’s Nubian enemies at the battle of Kadesh, Ramses II erected the two temples of Abu Simbel almost 300 km south west of Aswan to remind his neighbours of his strength and to commemorate the victory. The temples were hewn directly out of rock towering over the bank of the Nile river. The larger of the two temples is consecrated to Ra-Harakhty, Ptah and Amun. Its entrance is guarded by four impressive statues of Ramses II, each 20 meters in height. To the right of the main temple one can find the smaller temple of Hathor, godess of love and beauty, represented by his favourite wife, Nefertari.

In 1963, when the Aswan High Dam had been built, the two temples of Abu Simbel had to be “relocated” to higher ground, to protect it from the rising waters of Lake Nasser. This diffcult task, performed by the German company HOCHTIEF under UNESCO mandate, took 5 years and moved the temple 65 meters upwards.

Today you can reach Abu Simble by a guarded convoy, which takes about 3 hours drive from Aswan through the southern desert, or by plane (the boring alternative).