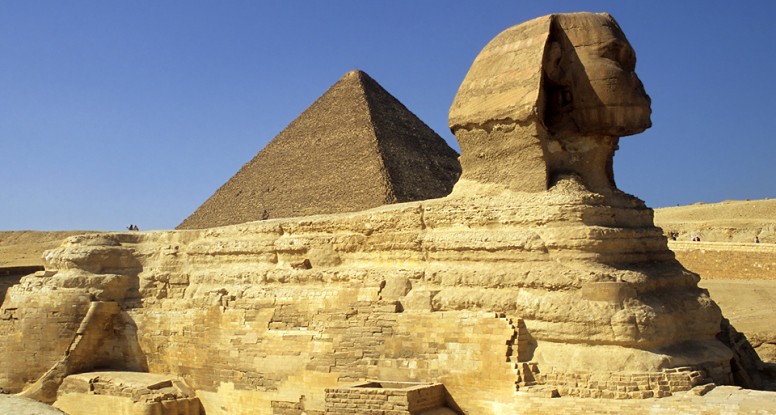 Giza pyramids and the Great Sphinx

To the west of Cairo – about 20 km from the center – you will find the Giza plateau, famous for its three great pyramids and the Sphinx. Giza (also Gizeh or Ghizeh in English) is a town on the west bank of the Nile river and nowadays incorporated into the greater Cairo metropolitan area. When I drove from Cairo to Giza I found it difficult to differentiate between the two as they have grown together.
As mentioned above, the Giza plateau is the site of some of the most famous ancient monuments in the world: the Gread Pyramids of Giza, the Great Sphinx, and numerous smaller pyramids and temples. For most people these are the monuments which represent ancient Egypt. The three largest pyramids are the pyramid of Cheops / Khufu, 2580 BC, the pyramid of Chephren (Khafre) and the smaller pyramid of Mykerinos (Menkaure). As for the Great Sphinx, it measures 57 by 6 by 20 metres (260 by 20 by 65 ft), and about its age there still is a lot of speculation.

Besides what can be seen on the surface, there is also an archaeologically rich underground to be explored, with passages, tombs and deep shafts. Visiting these can be difficult though, and be careful whom you trust and follow. Descending into one of the pyramids is also highly recommended. I tried the pyramid of Chephren and stayed in his undecorated burial chamber for quite a long time – to soak up some of the mood of the place. This also gave me the chance to chat with one of the wardens, who must be sitting in the chamber for hours and hours, he apparently (and understandably) despised those tourists who rushed through, chatting and laughing.